Music behind the wire 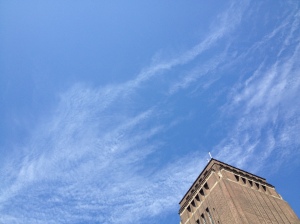 Did you know that Cambridge University Library has a variety of collections under its roof? Regular users will know that as well as the University Library itself (the “skyscraper” of Cambridge), and the affiliate libraries which are separate geographically from the UL, but all come under the same UL umbrella (ULbrella?), there are many smaller collections that have become part of the UL’s fabric. There are collections that have been acquired by the University Library such as the Royal Commonwealth Society‘s collections, or units that work on specific collections such as the Taylor-Schechter Genizah Research Unit or the Darwin Correspondence Project. Many of these collections have a digital presence on the Cambridge Digital Library. You can already find some music in the Digital Library including a collection of lute music, and transcriptions of Jewish liturgical music from the 12th century.

One of the latest collections to find its way on to the Digital Library is the Voices of Civilian Internment collection from World War II Singapore. As the Japanese army advanced into Malaya, Singapore and Indonesia many civilians were caught up in events, and ended up in internment camps in the region including Changi jail in Singapore. Music swiftly became an important part of life in the camps.

Music was often a vital part of survival in wartime, whether it was a morale booster, as Susi demonstrated in her Passchendaele post last week, a reminder that one day life would be better, or a fragile grip on sanity. Sometimes of religious significance, music was also a source of entertainment and a reminder of a cultural heart to society in a place where culture might not seem to matter very much.

The BBC drama series about life in a female internment camp in Malaya, Tenko, was originally developed following a particular musical moment which sparked researcher, writer and producer, Lavinia Warner’s interest in the period. Warner had been researching the life and work of Brigadier Dame Margot Turner, former Matron-in-Chief of Queen Alexandra’s Royal Army Nursing Corps, who was the subject of an episode of the popular TV series, This is your life, during which she was to be reunited with many of her fellow internees for the first time since the war. As Warner recounts in her book Women beyond the wire (539:1.c.800.69) :

….the women had agreed to sing a hymn composed in the camps by a missionary who had died there. It was known to them as “The Captives’ Hymn”…

Now this little group of survivors from those days gathered around Margot Turner and, unaccompanied as they had been then, and a little hesitantly at first in these strange surroundings, they began to sing. But as the words flooded back and their confidence grew there was a truly remarkable transformation. The years visibly fell away from them…so that they were young women again, vulnerable, beleaguered, a little afraid but taking strength from each other, as they must have done then.

….It was suddenly apparent that an extraordinary sisterhood had existed between these women in those days when they had faced a common peril and had last sung “The Captives’ Hymn” together.

You can read more about The Captives’ Hymn on Andy Priestner’s blog.

As well as The Captive’s Hymn, the composer, Margaret Dryburgh, also arranged a number of classical favourites for the voices available to her in the camps. Dryburgh died in Lubbuk Linggua Camp, Sumatra in 1945, a few months before the end of the war.

Voices of civilian internment has a small amount of music-related material in its Digital Library collection including a heavily annotated Salvation Army hymnal, choruses for camp concerts, and a manuscript song book used by the Changi Male Voice Party.

Music was equally important in other camps. Fania Fenelon has written an account of the work of the Musicians of Auschwitz (539:1.c.810.276) (also dramatized by Arthur Miller as Playing for time). Although the work is contentious in some of its historical accuracy especially relating to the character of the conductor of the camp orchestra, Alma Rose (Mahler’s niece), who perished in the camp, it gives an idea of the importance of music to survival, not least as a minor form of resistance.

Some astonishing music has been written in prison camps including Messiaen’s Quartet for the end of time (M320.c.95.70) composed while Messiaen was interned in the prisoner-of-war camp, Stalag VIII-A, and where the work was premiered in the bitterly cold Silesian winter of 1941.

Some incredible musical relationships were formed in enemy alien internment camps in the UK including the Amadeus Quartet, some of whose members first met up while interned in England. There’s more about this side of internment in an earlier MusiCB3 post – “Please send some cocoa.”

Among the most inspirational music is the astounding body of work of Czech composers Pavel Haas, Viktor Ullmann, Gideon Klein, and Hans Krasa; all of whom wrote a large number of works, not all of which survive, principally during their time in the Terezin concentration camp. Just about every medium is represented from opera to cadenzas, chamber music, songs and choruses.

Krasa’s opera for children, Brundibar, was featured in the Nazi propaganda film that was made about Theresienstadt. Sadly the children and Krasa himself were transported to Auschwitz shortly after the film was produced and liquidated, along with Viktor Ullmann, Pavel Haas and many others.

Gideon Klein disappeared during the liquidation of Furstengrube camp in January 1945 – his work was preserved by his girlfriend from Terezin, who was able to present the manuscripts to Klein’s sister at the end of the war. The UL has a vocal score of Brundibar: please enquire in the Anderson Room. Further works by the composers of Terezin can be found at M520.c.014.3 (Ullmann), M310.a.95.558 (Haas) and M290.a.95.109 (Klein). Enquire at the Anderson Room desk for more works by all four composers.

Terezin was astonishing for the quality of music and art that was produced there under frightful conditions. The inmates sang Verdi’s Requiem, and there were performances of The Bartered Bride, Tosca and The Magic Flute. Children were encouraged to learn music, while the string orchestra boasted members of the Czech Philharmonic and the Concertgebouw orchestras. For more about the incredible musical life of the camp, see Joza Karas’ Music in Terezin (M551.c.200.37).

Music couldn’t improve the physical ghastliness of prisoners’ living conditions, and it couldn’t set their bodies free, but sometimes just for a moment it could free their minds into a world where there was no longer wire and cruelty. Its power transcended time and took the inmates at least briefly to a better place.

Music Collections Supervisor at Cambridge University Library. Wide musical interests. Often to be found stuck in a composer's archive, or enthusing about antiquarian music.
View all posts by mj263 →
This entry was posted in Uncategorized and tagged concentration camps, music at the UL, music in prison, Voices of civilian internment, World War II. Bookmark the permalink.