Beethoven 250: What’s in a name? The “Bridgetower” Sonata

“Er, hello?” You are asking, dear reader. “Has SW finally gone completely mad?” Quite possibly, but that aside, I thought it was about time we gave this particular work the title it really deserves and bah humbug to Beethoven and Kreutzer both (now the cat is out of the bag and you have realised which piece of music I am talking about). In fact, it wasn’t the work itself which sparked the idea for this little post, but actually the first of the Rasumovsky Quartets, Op. 59 for which I had been reading Hans Keller’s programme note for a 1980 South Bank Summer Music performance by the Gabrieli Quartet in which he asserts that:

“The three ‘Rasumovsky’ Quartets, Op. 59, were completed in the year of their inception – 1806. Their relation to the distinctly earlier ‘Kreutzer’ Sonata is, in one respect, surprisingly close, though only quartet players will be concretely alive to it: just as the ‘Kreutzer’ is by far the most difficult fiddle sonata, so the Rasumovskys remain, amongst all the Beethoven quartets, the greatest technical challenge to players – notwithstanding the notorious musical and technical problems of the late quartets. They are, in fact, virtuoso quartets: a rare genre– at any rate, so far as masterly string quartets are concerned.”

H’mm, I thought, I’m not competent to judge this statement being only a modest exponent of the fiddle and that more years ago than I am prepared to admit, but I know a few folk who are, so I asked the experts (to whom, my grateful thanks). Interestingly, the answers were mixed (although all agreed fervently on the technical challenges of Rasumovsky no.1: “it’s like a concerto without the tuttis to relax in” replied one eminent quartet leader, another observing that the Rasumovskys and the Kreutzer Sonata “are each more difficult to play well  (both musically and technically) than the violin concerto…”) so perhaps there remains room for further debate and discussion. But I digress…

It was actually the reference to the Kreutzer which made me think of how this, Beethoven’s ninth violin sonata, op. 47, was so unfairly ultimately designated by the composer. Kreutzer didn’t even play it – in fact, he loathed the work. Instead, its premiere was given by the man who persuaded Beethoven to compose it, the wonderfully named George Augustus Polgreen Bridgetower with the composer at the piano as the ink was, literally, drying on the pages of the incomplete score (talk about making it up as you go along – this takes the concept to new heights).

Bridgetower, of a Polish mother and African or West Indian father, was born – probably – in 1780. He was lucky, musically, in that his father worked for Prince Esterhazy, who, as we know, employed Haydn. Clearly the young George was something of a prodigy as a violinist, which it seems his father, rather in the manner of Leopold Mozart was keen to exploit, presenting his son in short order at the 1789 Paris Concerts Spirituel and then to play at Windsor for George III and Queen Charlotte before nipping west to Bath to the Assembly Rooms the following month to repeat his success. The next decade saw George firmly establish himself as a leading virtuoso in English concert life, taking part in Salomon’s Hanover Square concerts, the Handel Commemoration concerts and a raft of other high-profile events.

Beethoven and Bridgetower finally met in 1803, thanks to Prince Lichnowsky, one of Beethoven’s patrons. The two men hit it off immediately and developed what I can only describe as a laddish mateyness as “in their time away from the piano,” Jan Swafford writes in his biography of Beethoven, [M520.c.201.88] “the two men seem to have caroused mightily”. Hangovers or not, the sonata was given its premiere on 24 May 1803. Intriguingly, Beethoven was working, in part, on a “here’s one I prepared earlier” principle in that he used a discarded finale from the Op. 30 sonata in A major and worked forward, as it were. It was a great success and Beethoven was delighted with the way Bridgetower was able to take an improvisatory liberty at one point, demanding that they do it again. Sadly, the two men fell out over a woman (sigh) and Beethoven, in a huff, dedicated the work to Rodolphe Kreutzer instead. Thankfully, Beethoven never knew that this violinist whom he greatly admired described the work to Berlioz (of all people) as “outrageously unintelligible”. What a great shame as it became something of an icon in music and indeed literature (think Tolstoy and Janáček) in the years which followed. It  is certainly the first violin sonata where the violin takes centre stage and which Beethoven himself reflected in the inscription he provided for its rededication to Kreutzer. The original is almost jokey “Sonata mulaticca composta per il Mulatto Brischdauer [i.e. Bridgetower] gran pazzo e compositore mulattico” whereas the one to Kreutzer is much more serious, reflecting the – pretty revolutionary – character of the work: “Sonata per il Pianoforte ed un Violini obligato, scritto in uno stile molto concertante quasi come d’un concerto”. And certainly, the violin writing is like nothing which had gone before and indeed it would be many years before there was anything comparable in approach. One feels a true coming together of equals, rather than the fiddle as an ornament to the piano. Beethoven, as he would do with Op. 59, the Late Quartets and Piano Sonatas was pushing through the boundaries and setting new ones, which were in turn broken as he comprehensively rewrote the “rules” of composition. 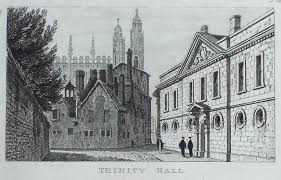 The entrance to Trinity Hall, Cambridge with King’s chapel in the background.

But what of Bridgetower? He returned to England and continued his highly successful career mixing with the cream of musical and aristocratic society including that of the Prince Regent. There is, also, happily, a Cambridge connection in that not only did he know and play for Charles Hague, Professor of Music at the time and a frequent performer at the Black Bear Music Club concerts (for which as my regular readers know I have a special affection), but also took the degree of Bachelor of Music here in 1811, naming Trinity Hall as his college. The work he submitted for admission to the degree was an anthem with words by F. A. Rawdon which received a performance at Great St Mary’s on June 3 that year. He died in 1860. As Mike Phillips writes in his biography for the British Library’s online exhibition about Bridgetower:

“Bridgetower’s legacy was not only about music, it was also about the possibility of transforming and transcending one’s circumstances, and about the contribution it was possible to make in shaping his environment, even under the most difficult circumstances. The final irony was that this ‘African Prince’ turned out to be – undeniably – a prince of European culture.”

Just think if he and Beethoven had chummed up again, what might have happened – perhaps there would have been an eleventh violin sonata, this time properly designated…