This week it was time to swap over the items in the Pendlebury Library exhibition case, to replace the collection of historical audio-visual formats that have been on display there for the last couple of months. MusiCB3 readers were promised some 1920s-themed posts, and so I thought I would collect together a few things related to the early 1920s musical scene in Cambridge.

First up, we have the Pendlebury Library borrowing register from the early 20s. Have a peer into the exhibition case to discover what was being borrowed in January and February 1920.

The Pendlebury also holds a score of music written for the Cambridge Greek Play, 1921. Cecil Armstrong Gibbs was the composer for that year’s play, writing music to accompany the Oresteia of Aeschylus.

Also from 1921, we have the music from the A.D.C. pantomime Aladdin, featuring a ‘Cambridge’ chorus, as well as a song about the ‘Pavement Club’, which was apparently a group of undergraduates who would sit rebelliously on the pavement on King’s Parade. The first meeting of this group was in May 1921 and consisted of “300 in Kings Parade; fried sausage and steak on Parker’s Piece” according to Cambridge University Students Rags Chronicle. 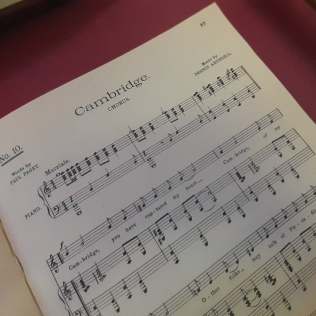 Bound in the same volume as Aladdin, there is the A.D.C.’s Christmas Revue from 1921. Musical revues were at their most popular in the inter-war years, and the UL sheet music boxes also boasts some examples of revue music which arrived in the library under the legal deposit act. This example from the Bran Pie Revue has some pleasingly 20s-ish costumes and dance forms going on…

The exhibition cases in the Anderson room at the UL will be graced with more 1920s legal deposit arrivals next week, but in the meantime, here is a taster of the kind of thing arriving under the act at around that time:

This entry was posted in Uncategorized and tagged exhibitions, legal deposit, Music at CUL, Music at the Pendlebury, Pendlebury Library of Music. Bookmark the permalink.