The Rising Tide in music

The Rising Tide: Women at Cambridge includes many stories of ‘firsts’ for women at Cambridge University. It is a celebration of achievements, yet also illustrates the struggle involved and the many waves of successes and setbacks. The story of women in music is certainly no exception. Their history has throughout been strongly linked to women’s position in society and their level of access to education.

Women have always played a role in music, but their contributions have often been less visible. Fascinating strands of the history of women in music can be discovered through iconography, literature and the study of ephemera and archival documentation.

Perhaps the hardest area for women to position themselves in music has been in the field of composition. There have been pockets of excellence and quite a few stories that have survived. Rich musical traditions in convents and music patronage at courts are typical examples. However, they have been an exception rather than the rule and music education as provided in church schools for many centuries was exclusively available to men. This has had a huge impact on the world of women and music. Even the secularisation of music education during the 19th century still did not provide a level playing field; initial music courses at conservatoires differed significantly for men and women.

Our society has for such a long time put pressure on women to put men’s careers ahead of their own that it has proved a hard pattern to break. Doreen Carwithen, an excellent composer whose manuscripts are kept as part of the William Alwyn Archive, is a perfect example. She achieved great success with early orchestral works and was the first composer selected for the J. Arthur Rank Apprenticeship Scheme on film music. Despite her early success, being a women composer was not straightforward and her later career was focused on the promotion of her husband’s music.  Although nowadays there are many more opportunities, the proportion of female versus male composers continues unbalanced.

Overall, history seems to have  provided us predominantly with information on women as performers. Professional female performers can be found in a wide range of cultures throughout the ages. Women as amateur musicians have also played diverse and important roles. Although the role of female performers has been significant, it has also been framed in a context of stereotyping and exclusion of certain areas of musical life. Professional orchestras for example only very gradually started accepting women and women conductors are until this day a minority. 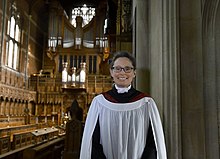 Women at Cambridge have contributed some recent ‘firsts’ to the field of music.  In the context of the 2019 Cambridge Female Composers festival, Sarah MacDonald has written about her experience as the first female Director of Music at a Cambridge College, a role to which she was appointed in 1999.  In 2014 Judith Weir was appointed Master of the Queen’s Music. Other notable Cambridge women in music include Joanna MacGregor,  Delia Derbyshire, Silvina Milstein and Errollyn Wallen.

Our music collections also form in their own modest way part of the story of women in music. Browsing through the various collections, it is possible to find some beautiful examples of achievements and contributions by women. Last year, we looked at Jenny Lind as the embodiment of Victorian Celebrity culture. Many other female performers are portrayed in our sheet music collections. Songs in particular and sheet music more generally form rich sources of information for research relating to women and music: songs dedicated to female performers, songs about women, songs about the history of women, feminist songs, politically very incorrect songs, iconographic representations on sheet music covers, song texts by female poets…

Another enlightening aspect is the provenance of manuscripts and collections of early printed editions. These fascinating sources of information provide insight into what women collected, for example for performance at home.  From our more recent collections and collectors we must certainly mention singer Hedli Anderson,  who collected in the context of her performing career, and Marion Scott, composer, violinist, musicologist and collector of early Haydn editions. Scott was an advocate for the rights of women and a founder member of the Society of Women Musicians.

The earliest example of printed music by a female composer in England dates from 1655. Henry Lawes’ Second Book of Ayres and Dialogues for one, two and three voices contains three pieces by Mary Dering. The introduction tells us that Lady Dering wrote three pieces on texts by her husband which are included in the volume. To quote Henry Lawes:”For (although your Ladiship resolv’d to keep it private) I beg leave to declare, for my own honour, that you are not only excellent for the time you spent in the practice of what I set, but are your self so good a composer, that few of any sex have arriv’d to such perfection“.

Many female composers from the 18th and 19th centuries are represented in our collections through manuscript collections and contemporary or later printed editions and anthologies. Often women were not only active as composers but also teachers or performers. Examples from the British Isles include Miss Davis (c1726- after 1755), who was a harpsichord player and singer, singer Harriett Abrams (c1758-1821) and organist and teacher Ann Mounsey (1811-1891).

Personal life could have a significant impact on women as composers. Margaret Essex (c1775- after 1807) was a teacher who composed music mostly for use at home. She published at her own expense but gave up composing when she got married.  The soprano Liza Lehmann (1862-1918) studied with Jenny Lind and had a very successful career as a performer. After her marriage she focused on composition, particularly songs. She also became the first president of the Society of Women Musicians.

Some women composers managed to publish quite successfully. Charlotte Barnard (1830-1869) for example published ballads and Maria Lindsay (1827-1898) songs for amateur musicians. At the music department, MRS.4, one of our topical special collections, is completely dedicated to Claribel (aka Mrs Barnard).  Music editions by women composers in our collections, however plentiful they may be, regrettably tend not to have the beautiful coloured lithographs we often see in popular Victorian sheet music. Noticeable is that many of the songs specifically mention that they “may be performed in public without payment of any fee”.  Publication, performance and remuneration are obviously different measures of success but sheet music publications are a clear illustration of the gap in opportunities between men and women.  Although many women composed in various genres, they were often best known for their songs, which are more easily performed and suitable for smaller and private settings. It is only from the 20th century onward that women compose more frequently in a wider range of genres, including opera and large scale orchestral works and that their works are gradually being considered on a more equal footing.

At the library it has in recent years become part of our policy to ensure we work towards narrowing the gender gap in acquisitions of newly published works. Both in Cambridge and further afield the field of women and music is developing rapidly. If you are interested in finding out more, the International Alliance for Women in Music is one of many good starting points.

This entry was posted in Uncategorized and tagged exhibitions, music history, The Rising Tide, women and music, women composers. Bookmark the permalink.

1 Response to The Rising Tide in music