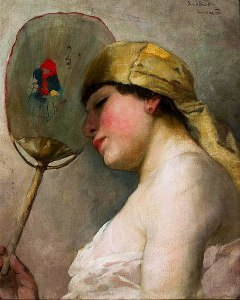 It’s been sticky work here at the UL over the last few weeks, especially in the non-air conditioned Anderson Room office, where even with a fan working like crazy, and most of the doors and windows open, the MusiCB3 staff have been melting with the heat.

Staff are busily planning, or are already on their holidays, with destinations ranging from a Cambridge back garden to Italy, the East coast of the USA, and the Scilly Isles, the Shetlands, France, and a health spa. We’re hoping that you, dear reader, are already relaxing in a deck-chair, while catching up on MusiCB3, but if not here are some musical ideas inspired by the holidaying librarians of MusiCB3.

My destination in a few weeks is going to be the Scilly Isles, somewhere I’ve wanted to visit for many years. There’s an unexpected connection to my work here, as on the Wednesday of “Scilly” week I’ll be on a wildlife safari, which (weather permitting) will take me to the southernmost point of the United Kingdom, and the westernmost point of England, just off the Bishop Rock Lighthouse. Bishop Rock seems to have played a recurring theme in my life in Cambridge. One of my earliest jobs here was working at the Pepys Library, Magdalene on a project to catalogue the Pepys ballad collection. It was here that I first came across part of the story of Sir Cloudesley Shovell, British naval hero, who drowned in the Scilly naval disaster of 1707. It was one of the worst disasters in British maritime history, with around 1500 sailors lost at sea. 4 ships were lost, one of which, HMS Romney, hit Bishop Rock.

More recently, Bishop Rock has played another musical part in my life, as in the William Alwyn / Doreen Carwithen Archive we have Doreen’s score, and the original sketches, for her Bishop Rock overture.

Kate’s trip to the United States, and last week’s post, put me in a suitably holiday mood. I was soon humming tunes from Charles Ives’ New England Holiday Symphony (scores of Fourth of July and Washington’s Birthday movements at MRS.8.74-75, ask in the Anderson Room office for Dedication Day and Thanksgiving and Forefathers’ Day, ).

Meanwhile, if you’re thinking of joining another staff member on the Shetlands, there’s plenty of music to inspire you from the Northernmost point of the UK (bizarrely prior to booking our hols, neither staff member was aware that they were heading to the northernmost and southernmost points, or that the other was headed in the opposite direction at the same time!). The Shetland Isles has a well-established fiddle tradition, Peter Cooke’s The fiddle of the Shetland Isles is not only a fascianting read, but also has an accompanying cassette to give you a flavour of the tradition at work (Pendlebury Library Pb.622.19B.C1 and Cas.A.124). Sir Hugh Roberton made use of the traditional music of the isles, when writing the Mingulay Boat Song, the song has been adapted since by folk singers developing its own post-Roberton life.

Musical lighthouses link the Scillies and the Shetlands, with Peter Maxwell Davies‘ 5th string quartet subtitled Lighthouses of Orkney and Shetland (available to hear on Naxos with a Raven password).

Meanwhile for holidaymakers travelling to France and Italy, what could be more redolent of hot summer days than Cantaloube’s Songs of the Auvergne, based on the folk music of the region, and sung in Occitan, the ancient language of Occitania; a land stretching from Piedmont and Liguria in Northern Italy to Provence, Limousin and Gascony in Southern France, and across into the Basque and Catalan areas of Spain; much loved by medieval troubadours, and the language of some of England’s Angevin kings. Nowadays, despite an upsurge of interest in folklore and language in the early 20th century, Occitan is spoken by less than 7% of the French population. Auvergnat, the Auvergne dialect of Occitan is rated by UNESCO as severely endangered, putting it on a par with the French dialects of Jersey and Guernsey.

I was rather amused when putting this blog post together to discover that spa music has not been neglected. There are at least two books on the subject, Ian Bradley’s Water music : music making in the spas of Europe and North America (M834.c.201.2), and the much earlier Le thêatre et la musique à Spa au temps passé et au temps présent by Albin Body (M525.d.85.1). Meanwhile the Pendlebury has a CD of the music of Adrien-Francois Servais, much of the music on this is dedicated to the spa-towns of Europe, and was undoubtedly played there (CD.N.142).

Finally, if your holiday is spent in a Cambridgeshire garden, do not despair, there is relaxation to be found even there…

Music Collections Supervisor at Cambridge University Library. Wide musical interests. Often to be found stuck in a composer's archive, or enthusing about antiquarian music.
View all posts by mj263 →
This entry was posted in Uncategorized and tagged CDs, librarians on holiday, music at the UL. Bookmark the permalink.