From the back row of the stalls: Hans Keller and film music 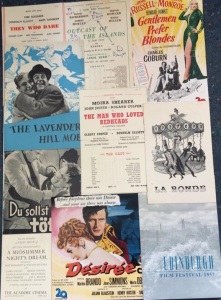 Film flyers from the 40s and 50s in the Keller Archive. © Cambridge University Library.

“In its relation to its audiences, film music is the most disquieting problem child of contemporary art (the stress being not only on ‘problem’, but also on ‘child’).”

So begins an unpublished article written by Hans Keller in August 1947 for the journal Now-a-days. It was a problem he decided, unilaterally, about which Something Must Be Done and so he appointed himself a one-man pressure group to (a) do what he could to raise awareness of the importance of music as an integral element of any self-respecting film and (b) to institute the practice of serious critical reviews of film music as an entity in itself. It would become a preoccupation (one might even say an obsession) for over a decade.

In many ways it was a golden age for the film industry – emerging from the privations of WWII: there was a ready and eager audience looking for distraction and entertainment to which it responded with aplomb producing many now classic films (think Ealing comedies, Olivier’s Hamlet,or The Red Shoes with Moira Shearer). Many had scores written by the most respected composers – William Alwyn, Georges Auric, Benjamin Frankel, Alan Rawsthorne, Mátyás Seiber and William Walton, for example. The University Library holds the sketches and a photostat of Alwyn’s score of The Winslow Boy (sadly the original was lost in a mass burning of manuscripts at Pinewood Studios) MS.Alwyn.1.1.155-157.

In the Keller Archive here at the University Library, not only do we hold many of the typescripts of his writings on film, but there is a box filled to overflowing with flyers for films from the impressive to the improbable as this taster from 1948 – a particularly fertile year for his cinema-going – shows (note that not all the films are 1948 releases, Night Mail and Love on the Dole for example are 1936 and 1941 respectively):

Many of the flyers bear Keller’s annotations or have clipped to them his feverish notes taken whilst in the cinema. A snatch of a motif here, a significant key-sequence there, a vignette of the action together with its musical manifestations elsewhere, all of which would later be drawn together into 500 or 1,000  well-chosen words setting out his reactions. His output, of course, was prodigious – nothing in his life was ever done at less than 120% – and in the dozen or so years during which he wrote regularly on the subject, he produced over 150 articles for Sight and Sound, Contemporary Cinema, BFI Monthly Film Music Bulletin, Music Review, Music Survey, Musical Opinion and Musical Times. 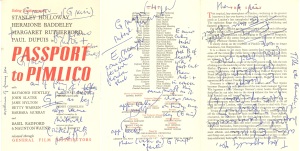 Amongst these was his first ‘Film Music’ column for Music Review – on Walton’s music for Hamlet: “…this excellent and well-recorded music cares as much about itself as about the film, thus practically disproving the would-be practicable theory that good music is too good to be good film music.” [Music Review 9/3 (Aug 1948) pp. 197-98] Keller highlights moments of particular inspiration at the opening and closing of the soundtrack, illustrated with copious musical examples, concluding that “Beginning and end of the soundtrack thus furnish a dignified frame for a picture which, Laurence Olivier’s lustrous performance apart, can be said to be “Hamlet” for the Man Who Enjoys Music.” [this latter a take on an advertising campaign of the time for the eponymous cigar]. The University Library holds part of what is thought to be an early version of the score for the Funeral March (MS.Add.8927).

But perhaps his most important contribution was the pamphlet published by the British Film Institute in 1947: The Need for Competent Film Music Criticism in which he argued his case with exceptional eloquence and exhorted the national press to take the task as seriously as it took music criticism and to recruit specialist critics to their staff for the purpose. 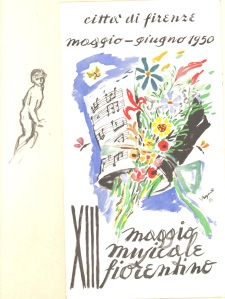 Brochure for the 13th Maggio Musicale festival in Florence with a preliminary sketch of a putti by Milein Cosman. © Cambridge University Library.

The observant amongst you will notice that I have not yet mentioned the Film Music Conference in Florence which took place in May 1950 as part of the Maggio Musicale festival in that city. The Seventh Florence International Congress of Music was held between 13 and 19 May 1950 as part of the 13th ‘Musical May’ in Florence. The theme was to be music and the cinema, but preparations were desperately behindhand. What to do?  Ildebrando Pizzetti, the Congress Chairman came up with the obvious answer: seek the help of Hans Keller who was delighted to provide detailed advice on who amongst film composers it would be good to invite and topics which would be good to discuss – and why. One of those on his invitation list was Hanns Eisler, whose 1947 work Composing for the Films Keller referred to repeatedly in his film music reviews as “too little known”, “brilliantly intelligent and musical”, “a confusing mixture of musical truth and communist irrelevance” (Eisler was deported from the USA in 1948 because of his politics). As for the event itself, Keller and his wife, the artist Milein Cosman both attended – Keller to report and speak (his paper was entitled ‘Featured Music: “classical” quotations’) and Cosman to sketch. Some of her characterful pen and ink drawings were used as illustrations to accompany the article ‘Florence the Fabulous’ by Keller reporting on the conference, published in Illustrated (15 Jul 1950), pp. 40 – 43.

Many thousands of words later, Keller’s last short column on film music for Music Review had travelled a long, long way from the intensity of his earlier writings (but was no less keen in its observations). In some respects, one wonders why it was published, but it is such a delightful vignette that I cannot resist setting it out here as a coda to this technicolor panorama:

“Jean-Paul Le Chanois has written and directed a remarkable film around the new method of natural and painless childbirth [painless? Who is kidding who here?]. The climax is the actual showing of a birth in the revolutionary circumstances, and I do not think that any sane person can escape the elemental impact of the sequence: this is the cinema at its best, at its most realistic – as opposed to its pathetic attempts to imitate art. What I don’t understand is why the film should have been stigmatized with an “X” certificate; I should have given it a “U” one. I don’t know where you learnt the facts of life; I myself was pretty fortunate in that I had all my questions answered as they cropped up, and I can only say that if this birth sequence had been shown to me by way of illustration, I should have saved myself a lot of supplementary questions and should have experienced, early on, the mystery of life as I experienced the mystery of art.

The only conceivable reason I can see for an “X” Certificate is the music*, which threatens to cheapen the experience. Joseph Kosma is a reputable composer in all conscience, though he is better known amongst musical people – and even though you don’t know how kitschy a dominant seventh can get before you have heard it in D Kosmajor, it is in this key that the surprising title march unfolds – surprising as a march, that is, until you discover, at the other end of the film, that it signifies the march of the embryo on the way to painless birth. This of all films should have been without music. As it is, music and film have entered into a negative symbiosis: the music degrades the life of the film, and the film degrades the art of music.
H. K.”
[‘Film Music and Beyond: the case of Dr. Laurent’. Music Review, Vol 20 no.3/4,  August/November 1959, p.301].

*We here at the UL agree with Keller!

1 Response to From the back row of the stalls: Hans Keller and film music