As one of the world’s largest dog-shows, Crufts, swings into action at the NEC Birmingham, this music librarian / dog lover thought it was about time to have a look at the relationship between dogs and music. I’ve owned dogs for most of my life, and coming from a music loving family, the dogs all grew up with music.

Their responses were rather different – Regis, the German Shepherd, hated Wagner – a quick burst of Tannhauser, and he would exit the room with a glower at the offending pianist (usually me), Ben, the English Springer, would howl along to Non piu andrai from The Marriage of Figaro, while a later English Springer, Alfie, heaved a contented sigh whenever I played his favourite work – Debussy’s First Arabesque, his companion, Dylan Yorkie-Cross, was not a fan of classical music, but loved Easy Listening with a particular penchant for Cole Porter.

This led to an interesting conversation when the dogs spent time in kennels. The kennels played Radio 2 to the dogs (good for Dills, less so for Alfie), while the cattery side had Radio 3 only.

Quite why my dogs responded in the way they did is anyone’s guess. Perhaps Alfie enjoyed the Debussy because his owner was particularly relaxed when playing it, but then I also feel the same when playing Bach, and Alfie didn’t enjoy Bach as much.

There has been a small amount of research done on the relationship between dogs and music looking particularly at dogs in shelters including “Behavioral effects of auditory stimulation on kenneled dogs” by Lori R. Kogan, Regina Schoenfeld-Tacher and Allen A. Simon, published in The Journal of Veterinary Behavior (2012) 7, 268-275. A more recent British study by A. Bowman, the Scottish SPCA, F.J. Dowell and N.P. Evans, was published in Physiology and Behaviour (volume 143, 1 May 2015, Pages 70–82) – ‘Four Seasons’ in an animal rescue centre – available on Science Direct with a Raven log-in – but the area remains largely unexplored.

More recently there has been some research into the sort of soundscape that dogs might be interested in listening to, with recordings offering a way to relax your dog, with music specially composed for the canine market. Any search on “Music for dogs” on YouTube will come up with a huge variety of videos, all promising to relax your mutt. I’m not entirely convinced of the usefulness of this, the music seems to be largely of the human relaxing variety, which personally I find less relaxing than irritating.

Rather more unusually, avant-garde performance artist / composer, Laurie Anderson, has held a number of concerts for dogs in Sydney and New York, featuring music played at frequencies that dogs would hear better than humans. (Headphones were provided for the auditory-challenged humans).

Many musicians have had canine companions, and music has sometimes been inspired by dogs. Probably the most notable instance of this is Variation XI of the Enigma Variations. Dedicated to G.R.S. (George Robertson Sinclair, then organist of Hereford Cathedral), it featured G.R.S.’s bulldog, Dan, a well-known local character, and avid swimmer of the River Wye. Leonard Bernstein, mentions Rostropovich’s dog, Puk, in the manuscript of his overture Slava!, while Paul McCartney, Elvis Presley and Cat Stevens all sang about the dogs in their lives. 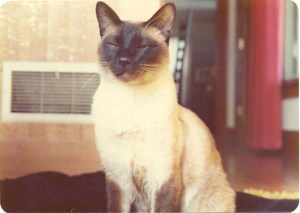 Dogs may have inspired music, and have definite musical tastes, but they have some catching up to do in the world of academia, where cats have already made their mark. Most famously the co-author of a paper on low-temperature physics, F.D.C. Willard, turned out to be the (sole) author’s Siamese cat, Chester. You can read Chester’s paper (ably assisted by his human co-author, Jack H. Hetherington), here.

Music Collections Supervisor at Cambridge University Library. Wide musical interests. Often to be found stuck in a composer's archive, or enthusing about antiquarian music.
View all posts by mj263 →
This entry was posted in Uncategorized and tagged animals, cats, dogs, hobbies, music, music inspired by dogs. Bookmark the permalink.