It’s nearly a year since we spent an evening with our friends at the Black Bear Inn here in Cambridge: high time to drop in on them once again. Let’s see what they were up to back in April 1789. A year which they would remember no doubt as only two months later across the Channel, the storming of the Bastille in Paris would take place, marking the start of the Revolution which would change the face of France for ever. Here, William Wilberforce was beginning to raise awareness of the horror of the slave trade. So, time to set all those concerns aside for a while and enjoy some music-making.

“Tickets 2s. 6d. each to be had at Mr. Wynne’s, Mr. Hague’s and Mrs. Pratt’s music shops, and of Mr. Scarborough at the Black Bear.” [2/6d would be about £10 today] says the programme. There were many music shops in Cambridge at the time (how different from today), concentrated in the Petty Cury/Peas Hll area near the Market Square. But, we must hurry as the programme announces that “The concert to begin precisely at eight o’clock” – it would seem that the problem of latecomers is not a recent issue! 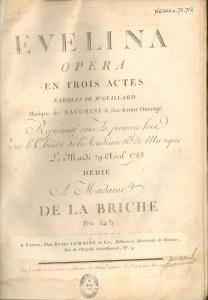 We begin with an overture by Antonio Sacchini (1730 – 1786) – composer of some 50 operas – who came to London in 1772 and stayed for a decade. Burney enthused about his works but sadly a colourful social life brought bankruptcy and a swift exit to Paris where he remained for the rest of his life. Which ‘Overture’ was played, we don’t know;  perhaps that to Evelina [MR260.a.75.712] first performed in Paris in 1788. The copy in the UL has an extra bit of MS offering a ‘concert ending’ to the overture, so it would have fitted the bill.

Next we have ‘Concerto: Handel’. Oh dear … but this would have been one of his Concerti Grossi rather than anything featuring a single solo instrument. Perhaps something from Opus 6. As part of the F. T. Arnold bequest, the UL has a copy of the third edition [MR320.a.75.701] published by John Walsh .

The concert at Christ’s College, June 1767. Peter Hellendaal is on the far left. The original is in the Rowe Music Library, King’s College, Cambridge.
©Cambridge University Library.

A new four-part glee by the Cambridge-based violinist and composer Pieter Hellendaal followed: “Spirit, once wand’ring through this dreary vale” which he published at his house in Trumpington Street. Hellendaal arrived in Cambridge in 1762, making a living as a performer and teacher (his pupils included the violinist Charles Hague who went on to become Professor of Music in 1799). He took part in the concert at Christ’s College in June 1767 featuring the pantalon virtuoso G. Noel and an engraving of the occasion is held in the Rowe Music Library at King’s College (a pantaleon or pantalon, is a kind of large dulcimer named after its inventor the German violinist and composer Pantaleon Hebenstreit). Hellendaal is buried in the churchyard of Little St Mary’s.

An unnamed concerto for horn closes the first half (or Act, as it was called). Well, take your pick! Not Richard Strauss, we can be sure, but Mozart? Haydn? Graupner? Telemann? Stamitz? The list goes on…

Returning refreshed after an excellent pint of the local ale, the second “Act” begins with an overture by Martini. Our next conundrum: is this is Padre Giovanni Battista Martini, hugely popular and highly respected by his contemporaries with Burney describing him as one of the most instantly likeable people he had ever met, or is it Giovani Battista Sammartini composer of nearly 80 symphonies? I suspect the latter. This programme, it seems, is throwing up more conundrums that certainties! At least we can be sure that the audience would have known what they were listening to. 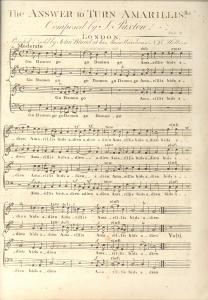 Next – hooray – surer ground: we have Mr. Clabburn, a tenor who often appeared at the Black Bear giving the aria “Flatt’ring tongue, no more I’ll hear thee” from Handel’s Oratorio Esther, first performed by the Academy of Ancient Music in 1742. [MR200.a.6.33 for the edition published by Samuel Arnold ca.1794 held at the UL].

And now we come to the focus of the concert: a concerto to be performed by John Scarborough whose benefit night it was. The concerto was probably one of the eight composed by Wilhelm Cramer who came to London from Germany in 1772, and was received so favourably as a performer that he decided to stay in England, becoming the most renowned of London’s violinists.

One of the many, many glees by Stephen Paxton followed: Turn Amaryllis to thy Swain. But hold on a minute – isn’t this Thomas Brewer’s most famous glee? Indeed it is, but The Answer:  ‘Go Damon go, Amaryllis bids adieu’, which follows is indeed by Paxton. The UL has a contemporary edition published by John Bland as part of his ‘Ladies Collection of Catches, Glees, Canons’ [MR340.a.75.20] 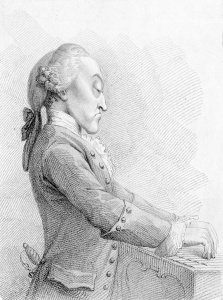 Dr Arne at the keyboard. Engraving after a portrait by Bartolozzi.

We end on a stirring note with the Overture to Artaxerxes by Thomas Arne (of “Rule Britannia” fame). Composed in 1762 to a libretto by Arne himself after Metastasio, it is regarded as the first English opera seria, and first performed in February 1762 at the Theatre Royal, Covent Garden. [MR340.a.75.20 contains John Bland’s publication of a keyboard arrangement of the overture].

And so, on a stirring final chord of D major, the evening draws to a close and a happy audience spills out into  Shoemaker’s Row, relishing the crisp air of a spring Cambridge evening to make its contented way homeward, talking, no doubt, of the excellence of Mr. Scarborough’s performance and looking forward to the next in the Black Bear series.

William Custance’s 1798 map showing the location of the Black Bear Inn is available as part of the University Library’s Digital Library Collection.