At the event: Haydn Op.20 no.1 Functional Analysis at the Guildhall School of Music and Drama 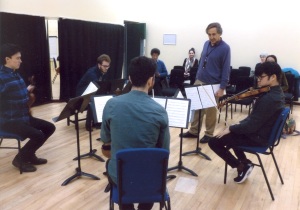 Levon Chilingirian and the Endräkt Quartet during the 11 March Professor’s Platform at the Guildhall School of Music and Drama.
© Christopher Wintle.

On 11 March, I was delighted to be invited to sit in on Levon Chilingirian’s Professor’s Platform at the Guildhall School of Music and Drama. Its focus was to be a performance of Hans Keller’s Functional Analysis of Haydn’s String Quartet Op.20 no.1 in E flat major, given by the Endräkt String Quartet (Timothy Chua, William Newell, Tim Hansson and Thomas Vidal), all students at GSMD. Bookending the performance were discussions exploring Keller’s innovative concept. It proved to be a thought-provoking and deeply engaging occasion.

But first, a little background: MusiCB3 has already devoted a post to Functional Analysis, but let’s just take a moment to remind ourselves why Keller developed this method of musical analysis. “The question which any theory of music must be able to answer” he writes in an article for The Listener of 11 June 1970, “can be put monosyllabically: what we want to know about music is what it does and how it does it.” Earlier, in his article for The Listener of 5 December 1957, written to accompany the very first broadcast of an FA, he says “…functional analysis proceeds direct from music via music to music”. 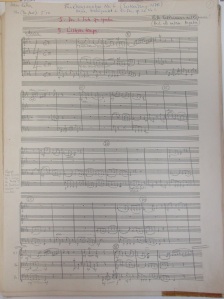 To the Platform then: the occasion formed part of an ongoing programme, devised by  Evan Rothstein, Deputy Head of Strings at the Guildhall, to connect with the teaching heritage of the School. Keller had coached quartets and worked with Buxton Orr on the General Musicianship course at GSMD from the autumn of 1982. Intriguingly, this might not have come about as Keller, in a letter of May 1982 to Peter Norris at the Menuhin School confesses: “I am in 19 minds and have postponed my final decision: we might discuss. Above all, is there not a danger of one’s contradicting the more regular teaching staff, some of whom are, after all, regular quartet coaches?” Clearly he overcame his reservations.

Introducing the session, Levon Chilingirian talked a little about the unique experience of being coached by Keller (his Quartet had worked with him during the 1970s, in particular on the Haydn Quartets), referring to the astonishing agility of Keller’s musical mind and his ability to think from point to point musically in a way which most of us simply can’t. Crucially, he went on to say that playing this (and indeed other FAs) had given him a greater understanding of the work, which, in turn, had informed subsequent performances. 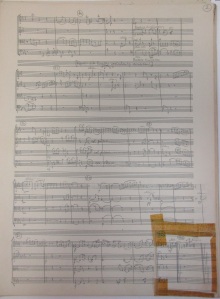 And so, on to the performance itself. The commission to prepare a functional analysis of Haydn Op. 20 no.1 came from Norddeutscher Rundfunk (NDR) as one of a series of Haydn Quartet FAs which would be broadcast during 1959 to mark the 150th anniversary of Haydn’s death. Intriguingly, it wasn’t on their initial list of works, but was agreed upon between Keller and Helmut Wirth at NDR over the course of a series of letters, now in the Keller archive here at CUL, between May and Sept 1958.

Op 20 no.1 is a work for which I have a particular affection, especially the glorious slow movement – the still, contemplative yet intense heart of the work – and I was keen to see how/if Keller’s FA would have an effect on my perception of the piece. In short (to quote), it did. Mind you, it didn’t do to take your eye off the ball (or should that be ears off the notes) otherwise you’d risk missing a crucial piece of the argument as Keller, between each movement of the quartet, laid bare the underlying building blocks not only of the movement just heard, but, as the work unfolded, right across the piece, referring back and forth as the need arose. 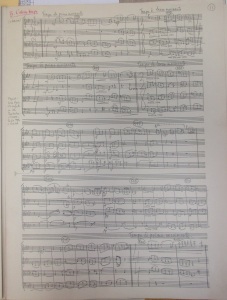 Discussions afterwards, led by Levon Chilingirian, explored a number of themes, including, perhaps most importantly, what effect studying the FA had had on the Endräkt Quartet’s own performance. They agreed that, whilst it had taken time to get to grips with the concept, it had given them a better understanding of the piece and especially noted that sometimes what, at first glance, seemed to be insignificant figurations turned out to be key building blocks. They also said that seeing the underlying connections had made them stop and think about tempi a great deal more – in particular, for the first movement. “FA doesn’t say what you should learn” Levon Chilingirian observed “but is there to take what you will”. He emphasised that a searching frame of mind when playing through one of Keller’s Functional Analyses is all important – thinking and playing at the same time – using the space to explore the work, to enrich musical understanding which in turn informs subsequent performance and/or listening.

As a listener that afternoon, my musical understanding was most certainly enriched and my thanks go to Levon Chilingirian, to Evan Rothstein and most especially to the Endräkt Quartet, for allowing me to sit in. I look forward to the next time.

Manuscripts of all of Keller’s Functional Analyses (except for that of Britten’s Second String Quartet which is in the Britten-Pears Archive) are held as part of his archive here at the University Library. We also have a copy of the volume of printed scores edited by Gerold Gruber, published in 2001.

This entry was posted in Uncategorized and tagged At the event, Functional analysis, Guildhall School of Music and Drama, Hans Keller. Bookmark the permalink.

1 Response to At the event: Haydn Op.20 no.1 Functional Analysis at the Guildhall School of Music and Drama