Libraries past and future

As I near the end of my six months working here, it seems that the time since I started last January has vanished all too quickly. The maze of shelves, stacks, hidden corridors and collections that the UL and the Pendlebury have made all so familiar will, at the end of the month, be another memory. Now, as my role as one small cog in the enormous machine of the university comes to an end, I begin again to reflect on my time here in Cambridge and look toward my own future as an undergraduate and reader rather than a fetcher (the other side of the issue desk!).

Finding myself in late-January halfway through a year out, the wait until university in October without any particular academic diversions appeared an interminable stretch. Finding a part time job in town was a logical direction to take, for the sake both of funding my burgeoning coffee addiction and the more serious and less caffeinated business of saving for travelling and university. Given the convenience of the other half of Oxbridge being so close, finding work within the university offered obvious attractions; the wonderful working atmosphere (I’ve a few horror stories from my time behind a bar), the sheer beauty of central Cambridge (as I’m sure all reading this will appreciate), and the valuable chance to understand the work behind the scenes that holds such an institution together. After a charming interview with the University’s TES, an early morning phone call sent me to an equally charming interview with Helen and Anna of the University’s Music Library, and so I found myself as a part-time book fetcher in the music libraries.

And no less charming than the interviews has been my time working here. Cycling in Cambridge is a truly stunning commute; the brief three seconds of the view of King’s and Trinity Hall whilst cycling over Garrett Hostel Bridge certainly makes the effort of it worthwhile. My work as a fetcher divides me between the Pendlebury Library and the music department of the UL on different days of the week. The University Library, whilst ‘new’ in Cambridge terms (opened in 1934) nonetheless possesses an undeniable grandeur in Sir Giles Gilbert Scott’s signature brutalist, industrial, functionally immense style. The idiosyncratic arrangement of 17thc oak bookshelves and modern interiors belie the true mass of the Library’s holdings, however; over 100 miles of shelving hold around eight million items. A brief look into the music department alone would reveal such bibliographic variety as leather bound tomes of Renaissance choir books, a biography or two of Frank Zappa, endless sheet music and cutting edge post-colonial critical theory.

The Pendlebury offers a more modern working environment, amongst other things, to its users, with the spacious reading room particularly popular in the undergraduate exam season (for obvious reasons equally popular is the bowl of chocolates on the issue desk). Typically my day might involve re-shelving, fetching, labelling and scanning, stamping new acquisitions, book moving, working with the computer systems, issuing or returning books, or even writing a blog post or two. 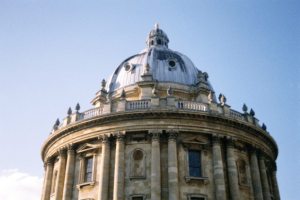 “The other place”
Copyright Oscar Haines.

And yet, my tenure here will soon conclude; after leaving here, I’ll partake in the stereotypical ‘gap yah’ travels (following Fitzgerald’s footsteps in Paris, trains through western Europe, staying with family in Portugal) until October, when I’ll resign myself once again to academic work for the next three years (at least), reading English at Oxford. An understanding of the university library system beyond books being simply spirited into being by Ariel-esque forces will serve me well in navigating each of the many libraries at ‘the other place’; my frequent haunts will be the English Faculty library, the two college libraries at Worcester, and of course the Bodleian (as an English student, I’m told I’ll find the Radcliffe Camera useful for more than just posing in front of for the parents). Of course, living in Cambridge I’m sure I’ll find an excuse to return as a reader during the vacations – so I may well conclude less with ‘goodbye’, and more with ‘au revoir’.

Music Collections Supervisor at Cambridge University Library. Wide musical interests. Often to be found stuck in a composer's archive, or enthusing about antiquarian music.
View all posts by mj263 →
This entry was posted in Uncategorized and tagged CUL, Farewells, library staff, music librarians, Pendlebury Library of Music. Bookmark the permalink.