An evening with the Black Bear Music Club: May 8th 1809 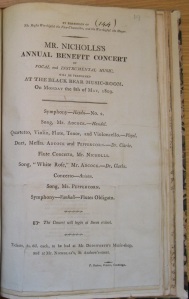 It’s been a long time since we visited my friends at the Black Bear Music Club. High time to put that right and see what they were up to once again, so, setting aside my work on the Hans Keller archive for a moment, I thought we would have a look at their concert of May 8th 1809 – a benefit night for George Nicholls, one of their two regular flautists, and the very last programme we have in our collection. Let’s first fortify ourselves with a jug of good ale before going upstairs, having paid our 5/- [shillings] (and making sure that, as a lady, I am suitably accompanied by a gentleman member), to take our seats and see what’s on the programme.

First, though, a quick word about George Nicholls. Accorded benefit nights as one of the regular performers, he taught the flute in Cambridge and composed many two-part divertimenti for the instrument which were available at both William Hague (Professor Charles Hague’s brother) and Morris Barford’s music shops in Cambridge. It is tempting to think that he may have performed several of them together with his relative J[ohn]. Nicholls, also a flautist who often appears with him on the handbills.

The evening begins in suitable style with Haydn’s “symphony no.2”.  Not, of course, the No.2 in C that we know today (Hob I:2) but what was then known as the second of his twelve “Grand Symphonies” composed in London and Vienna for the impresario Salomon and first performed at the Hanover Square Rooms. Even then, this is not the second of the London symphonies as we understand them today, no. 94 in G, the “Surprise”, but No. 93 in D [Hob I:93] as the numbering used by the Black Bear would have followed that assigned by Salomon. Happily, documents and the autograph scores belonging to the impresario survive and are to be found in the British Library as part of the Royal Philharmonic Society archive. 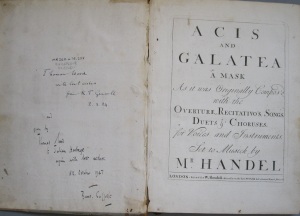 A 1769 edition of Acis and Galatea belonging in the 20th century to Thomas Wood and Julian Herbage.
© Cambridge University Library. [MR260.a.75.255]

The first item to feature George Nicholls follows: enigmatically billed as “Quartetto, Violin, Flute, Tenor and Violincello – Pleyel”. Pleyel was a great favourite at the Club and this is probably one of the set of six from 1797 (B.387 – 392) [M321.a.200.8]. In addition to Nicholls, the other players are likely to have been Charles Hague (violin), Mr. Marshall (viola) and Morris Barford (‘cello) – all regular performers. 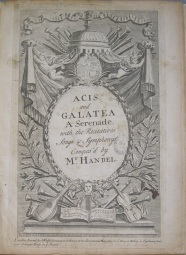 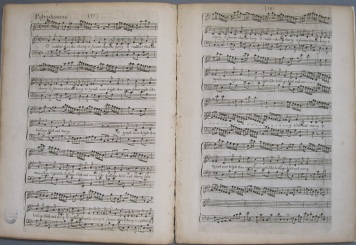 Polyphemus’s famous aria “Oh Ruddier than the Cherry” from the Walsh score of Acis and Galatea.
© Cambridge University Library [MRA260.70.6]

Back to a vocal duet next, with “Weep no more, nor sigh nor groan” by John Fletcher (1579–1625) set to music by Dr.Clarke from the Queen of Corinth a Fletcher play published in the first Beaumont and Fletcher folio of 1647. Mr. Adcock is joined by another Club regular Mr. Peppercorn for this item. Dr. Clarke, by the way, is almost certainly James Clarke Whitfield, who succeeded Charles Hague as Professor of Music

Thence to the centrepiece of the evening: George Nicholls’s moment to show what he was made of…but…alas and alack, all the information we have is “Flute concerto – Mr. Nicholls”. We cannot even turn to the local papers for a review, but the audience would certainly have known what to expect! Quantz? Devienne? Frederick the Great? Loeillet? Take your pick.

Following another Dr. Clarke item, a setting of “My Stella sleeps” by Anna Seward, the Club members gave a performance of one of Charles Avison‘s many, many concerti grossi (perhaps one of those from the 1776 set in the UL’s collection [MR310.a.75.2]), after which it was Mr. Peppercorn’s turn for the limelight with a performance of the broadside ballad “When Vulcan Forg’d“. 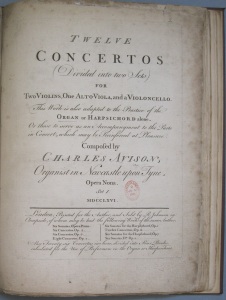 Finally, the evening drew to a close with a symphony by Johann Baptist Vanhal (1739 – 1813) with “flutes obligato” [sic]. Czech by birth, but based in Vienna, Vanhal (or Wanhal) these days is an enigmatic figure, but in his time he was well-known. A highly-respected composer, performer and teacher he was one of the first to support himself through his musical activities without having to rely on a court or church position to provide a regular income. He played quartets with Haydn, Mozart and Dittersdorf and his considerable output was a constant feature of concert programmes across Europe – the Black Bear no exception. Sadly, again we don’t know which of his many symphonies this was, but I’m sure the audience would have been delighted and would have cheered its obbligato flutes, the Messrs Nicholls, to the rafters before spilling out into Shoemaker Row remarking on the fine performances they had heard.