You must excuse the terrible title pun. Blame it on my colleague Justin, who had both the bright idea to suggest this post, and is also responsible for the Staff Quiz team name, Piotr Zak (more on that elsewhere on MusiCB3). One of my jobs in the University Library Music Department is to sort through the music scores that arrive from the Copyright Agency, and to separate them into categories ready for stamping, binding, and cataloguing.

Music that looks as though it’s likely to be of academic interest is divided into two categories – material that is suitable to be bound or is already bound, and music that’s unbindable – usually because it’s either too flimsy, or is bound in an unsuitable way.

A recent intake from the Agency included a facsimile of Stravinsky’s arrangement of The Rite of Spring for piano 4-hands, and the organ music of Grayston Ives; while unbound or unbindable material included the string quartet parts for an arrangement of Finzi‘s 5 bagatelles for clarinet and string quartet, and a spiral-bound score of Brian Ferneyhough’s Chronos-Aion.

Music that appears not to be of academic interest is boxed separately. Of course this is a very subjective judgement. Material that doesn’t seem to be of great interest now might be very useful to researchers in 100 years time – as is already the case with our Victorian song collection. Among the items that we have just received that fit into this category are the music from Black Sabbath’s latest album, 13, and the enchantingly named English folk tunes for ukulele, which sounds like a very odd British-Hawaiian fusion album.

Imagine my surprise though when in the middle of this batch of music I came across a selection of part-songs by William Cole (1909-1997), that judging by the look and feel of the paper were not recent publications. Also….as they were first published as part of the Novello Part-song book series we should already have received them under the Copyright Act.

This seemed very odd, so I investigated further. It turned out that the handful of part-songs that we had just received actually dated from 1947. One can only speculate where they had been sitting for the last 65 years – entombed perhaps on a publisher’s shelf, before accidentally being swept up and sent off to the Copyright Agency. Sadly there’s no happy ending for these Flying Dutchmen of the sheet-music world – we had received the William Cole works when they were first published. Most of them can be found at M289.b.41.32. The wandering scores were returned to the Agency. 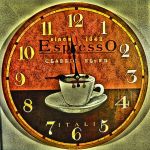 It’s not uncommon to hear grumbles both among librarians from the copyright libraries and readers. “There’s not as much music being received as there used to be” (True – to a great extent because of changes in publication practices). However my batch of “ancient” copyright claims proves that a fair amount does arrive eventually, you may just have to wait a while….

Music Collections Supervisor at Cambridge University Library. Wide musical interests. Often to be found stuck in a composer's archive, or enthusing about antiquarian music.
View all posts by mj263 →
This entry was posted in Uncategorized and tagged Copyright, legal deposit, Music at CUL. Bookmark the permalink.