MusiCB3: What has your road to librarianship been? 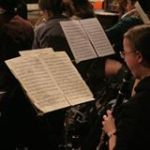 Sarah Chapman: Finding myself working in a library doesn’t really surprise me. As a child I always enjoyed reading and was a librarian at secondary school.

When I left Sixth form college I didn’t know what it was that I really wanted to do, and there was a vacancy at CUL which I applied for and was accepted.

What do you like most about the University Library / the Pendlebury Library’s Music Collections?
SC: If you haven’t been to either of these libraries, you won’t know about the many wonderful items we have. When I have helped colleagues put out various exhibitions, I’m still amazed about the variety of our holdings, from the smallest to the largest of volumes. We also have beautiful treasures from a high number of composer archives which are also stored here.

Do you read any foreign languages?
SC: I know some French, and since working at CUL I have had to deal with several other languages; I have not properly learned these, but know enough about them to pick out vital words which help me with my work.

What do you like about working in Cambridge most?
SC:

View of the Jerwood Library. Photographed by Sarah Chapman, August 2013.

These photos are of the River Cam. I think they have a certain “Wow!” factor to them.

There are so many attractions in Cambridge and being a university city there are always so many different people from a variety of background and cultures.

Best day at work?
SC: After having worked as a book fetcher for 1 year at CUL, a higher position became available in the Music Dept. Having been on an induction course during the previous year for new members of staff, I was aware of the Music department and really wanted to work there. I applied and got the job. I was really happy when I found out that I would also be dealing with actual music. What a dream job. I have been here ever since.

What is/are your most favourite composer(s)/type(s) of music?
SC: There are so many different composers and types of music to chose from. I think one composer who I like the most has to be J.S. Bach . Every time I have to choose some music I always come back to Bach.

I also really like worship music and within the Anglican Church there are many composers as well. My favourite modern worship composer is Stuart Townend. I find his music powerful and he can really send shivers down my spine when listening to his compositions. I have been to one of his concerts and it was thrilling.

What is/are your instrument(s)?
SC: I play a variety of instruments. I learnt to play the descant recorder when I was 6 which is when I learnt to read music.

I later learnt to play the clarinet which I continue to play – both Bb and A clarinet – in the University Cambridge Philharmonic Orchestra during University term time.

I used to play in a swing band with my Alto Saxophone, and started playing the piano.

I also sing in my church choir where I achieved my RSCM Dean’s Award. At Christmastime the University Library has a communal choir, and we sing to the public before Christmas.

Any hidden talents?
SC: I have recently discovered that I enjoy taking photographs, and have taken quite a few, some for MusiCB3 Blog posts.

I am also a keen runner and have taken part in 13 Race for life’s (Cancer Research UK), 3 Great North Runs, 1 Great South Run, and various sponsored walks. I do this to raise money for for Leukaemia & Lymphoma Research.