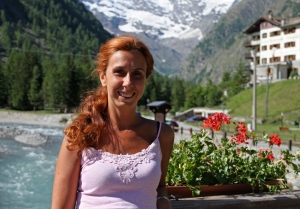 MusiCB3: What has your road to librarianship been?
Roberta Schiavone: After my conservatory’s diploma and while I was still completing my master’s degree in Humanities Studies, by accident I started working in the library of the Conservatory of music of Trieste (Italy) … love at first sight! Thanks to the expertise of the chief librarian, Paolo Da Col, I developed a true passion for librarianship that I then developed further with professional studies.

Before working at the Pendlebury Library, where have you been?
RS: After the three-years’ experience in Trieste, I had the chance to run for twelve years the Music Library at the Istituto Superiore di Studi Musicali “Vecchi-Tonelli” in Modena (Italy), a small but prestigious institute of music, comparable in every aspect to national conservatories in Italy; here I gained extensive hands-on experience of all library procedures and had the honour of being in contact with many famous Italian musicians, such as the opera singers Luciano Pavarotti, Raina Kabaivanska and Mirella Freni, the trumpet player Andrea Tofanelli, the clarinettist Corrado Giuffredi,
the flautist Andrea Oliva and many others.
At the end of 2012 I moved to the UK and, before working at the Pendlebury Library, I have worked for some months at the University of Leicester Library.

What do you like most about the Pendlebury Library/the University Library’s Music Collection?
RS: I’m really excited about being part of the staff of the Faculty of Music Library. Working in a music library is like ’being at home’ for me. I’m very glad to have the opportunity to be in contact with students and researchers; it’s without any doubts one of the aspects I like most in this job.

Do you read any foreign languages?
RS: I speak Italian as a native speaker and, besides English, I have a good reading knowledge of French.

What do you like about working in Cambridge most?
RS: I like working in Cambridge because it is a multi-cultural town with one of the top universities in the world and an important history. To be here is a dream I had since I was a little girl, but I didn’t expect it could be realised! It is an important opportunity for me because I can improve in my job and learn new things.

Best day at work?
RS: I have a lot of positive memories linked with my job. The first image I remember is my first day at the library of Istituto Superiore di Studi Musicali “Vecchi-Tonelli” in Modena. Before my arrival, the library had been closed several months and nobody knew exactly when it would open. As soon as I opened the door, César, a clarinettist coming from Chile, appeared and asked doubtfully if the library was open for real. After my positive response, his face changed completely and he gave me a broad grin. In the two following years, until his diploma, César came every day into the library to look for a score or just to say hello. One of many satisfying moments! 🙂

Worst day at work?
RS: My work in Modena also involved coordinating lectures and individual lessons for instrumentalists and singers on the school’s two-year Master’s course. The worst days were the ones when I had to say goodbye to “my students” after the completion of their degree, because most of them lived in other parts of Italy, or because they decided to continue their studies abroad. Fortunately, thanks to the social networks, I’m still in contact with most of them. 🙂

What is/are your most favourite composer(s)/type(s) of musics?
RS: Being Italian, I necessarily love the great Italian opera composers, but I also greatly appreciate the symphonic and chamber music. I’m embarrassed if I have to say which composer I like better, but I’m sure I prefer 19th century music. In the last years I have developed a passion for jazz.

Where did you live before moving to the region?
RS: I was born in Trieste, a seaport in North-eastern Italy, situated near the Slovenian border. Here I passed most of my life before moving to Modena (the city of Pavarotti and Ferrari) in 2000. At the end of 2012 I moved to the UK and I stayed for some months in Leicester. I have been relocating a lot!

What is/are your instrument(s)?
RS: I’ve got a diploma in clarinet, taken at the Conservatory of Venice (Italy)

Any hidden talents?
RS: There is surely a reason if they had stayed hidden until now, so maybe it’s better not to open Pandora’s box. 🙂

Roberta Schiavone starts as Library Assistant at the Pendlebury Library of Music on Monday 29th July 2013.

The "author" MusiCB3 is used for all the "guest contributions". Every post by a guest is signed. Most of our guests are based in Cambridge (libraries). If you would like to contribute to this blog as a guest please contact us via music [at-sign-thingy] lib [dot] cam [dot] ac [dot] uk.
View all posts by musicb3 →
This entry was posted in Uncategorized and tagged librarianship, Meet..., music librarians, Pendlebury Library. Bookmark the permalink.