If it’s ever Spring again

My desk by the window at the Pendlebury enables me to enjoy an abundance of natural daylight.  It also exposes me to the chilly force of the endless Cambridge winter, so I have spent the last few months swaddled in jumpers and scarves.  Whilst I was leafing through a stack of newly-acquired song books last week, I felt it was with some bitter irony that the page fell open at Benjamin Britten’s setting of a Thomas Hardy poem, If it’s ever spring again.

Thomas Hardy at his desk in 1913. Photo: Bettmann/Corbis

Hardy’s words have inspired many twentieth century composers, notably Vaughan Williams, John Ireland, and Gerald Finzi, who set over fifty of Hardy’s poems to music.  Britten’s version of If it’s ever spring again was originally composed as part of the 1953 song cycle Winter Words, but was discarded from the sequence along with another of Hardy’s ballads, The children and Sir Nameless.  The Britten-Pears archive in Aldeburgh contains several such examples of songs written for cycles that were ultimately excluded when they failed to fit the scheme of the final work, including settings of words by Auden, Rimbaud, Donne and Blake.  Both of the cut songs with words by Hardy were published posthumously, and were first performed for a BBC broadcast in 1985.

The Pendlebury holds two recorded versions of these cut songs from Winter Words, one of which is performed by the tenor Robin Tritschler on the CD Britten: Songs (Vol II), Onyx 2011, CD.K.279.

We also have a version of the Winter Words cycle recorded by Britten (on piano) and the tenor Peter Pears in 1954, five months after the first performance of the work at the Leeds Festival, on Britten conducts Britten, Decca 2006, CD.M.959.

Britten and Pears performed the work in the last recital they gave together in September 1972.  Hardy is a well-chosen source for poignant sentiment; the closing song of the cycle, Before Life and After, contemplates a time before human consciousness, when ‘[n]one suffered sickness, love, or loss, / none knew regret, starved hope, or heart-burnings’.  Like Finzi, Britten was drawn to Hardy’s themes of innocence corrupted, ideas that he also explored in his settings for the Songs and Proverbs of William Blake (1965, available at the Pendlebury at Pa.297.91B.X4), and Walter de la Mare’s Tit for Tat (1928-1931, revised 1968, Pa.297.91B.X5).

The volume of music containing If it’s ever spring again is one of a selection of Art Songs bought following a request from a student, and the Pendlebury now has Art Song in English: 50 songs by 21 American and British Composers (ed. Carol Kimball, Boosey & Hawkes 2006), Pa.259.20A.X1 and Pa.259.20A.X2, and 15 Art Songs by British Composers, with a CD of piano accompaniments (Boosey & Hawkes 2011) 866.X.F1 and 866.X.F2.  Both are published in separate editions for high and for low voice. 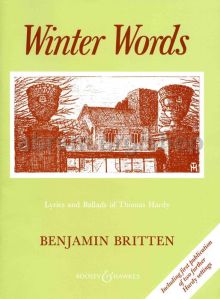 Art songs are hot property in the Library; the unbound scores and sound recordings of Winter Words are highly in demand whenever audition posters go up in the Faculty.  These new additions to the collection may well be popular as Easter term concerts come round.  If ever it IS spring again – and already the weather is improving and spirits are lightening – perhaps a more suitable seasonal option can be found on page 34 of the Kimball edition… Leonard Bernstein’s Civet a toute vitesse (Rabbit at top speed!)

Library assistant at the Pendlebury Library of Music
View all posts by hb281 →
This entry was posted in Uncategorized and tagged C20 composers, recent acquisitions, sheet music, songs. Bookmark the permalink.