On 1 May 1851 Queen Victoria opened the Great Exhibition of Art and Industry in Joseph Paxton’s newly-built Crystal Palace in Hyde Park – a building which would dominate British cultural life until 1936. The exhibition ran from May until 11 October presenting 100,000 international exhibits of an astonishing range from the Koh-i-Noor diamond to Dr. Merryweather’s leech-powered Tempest Prognosticator on show to the six million visitors who thronged to the Palace.

1,800 musical instruments (pianos taking up the greatest space) were included in the Great Exhibition, mainly for their technical rather than musical interest. Juries for each of the classes of exhibits were appointed and those on the Musical Instruments Subsection included Berlioz, Sterndale Bennett, Thalberg, Cipriani Potter and Sir George Smart. Berlioz clearly found the task a taxing one, writing to his sister Adèle in June 1851:

“No one could imagine a more dreadful chore than the one for which I have been specially selected. I have to listen to wind and brass instruments. My head is bursting with the sounds of hundreds of wretched contraptions, each more out of tune than the rest, with three or four exceptions.” (Correspondance général no. 1417). 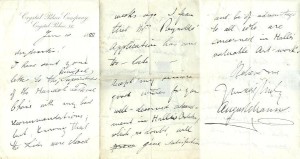 Letter from August Manns to Charles Reynolds regarding the Handel Festival in 1888 (University Library, Thistlethwaite collection)

The Crystal Palace was never intended to be a concert venue, but following its reconstruction and enlargement on a new site in Sydenham between 1852 and 1854, it quickly established itself as a place of entertainment and general recreation. The building of performance facilities in the centre transept of the Palace marked the start of developments which would set the pattern of concert life in London for the next 80 years.

The Palace provided an ideal location for the large-scale choral performances of Handel established by Michael Costa and the Sacred Harmonic Society. The extravagant 1859 Handel Festival set the pattern for the subsequent Handel Triennial Festivals which lasted until 1926. Day one was Messiah Day, day two presented selections from Handel’s works and day three was Israel Day.

The famous Saturday Concerts, which had their heyday in 1860s and 1870s, began with August Manns’ appointment by George Grove (then Secretary of the Crystal Palace) in 1855. Manns was involved in every aspect of the concerts: building the programmes , developing the repertoire, as well as rehearsing his orchestra and establishing the reputation of the concerts – and with this, the ability to attract internationally recognised soloists such as Joachim, Piatti, Vieuxtemps, Hallé, Clara Schumann, Anton Rubinstein, Sarasate, Paderewski, and Ysäye.

There was a great variety of musical events at Crystal Palace other than the Handel Festivals and the Saturday Concerts. Amongst these was the National Brass Band championships. The first was held in 1900 managed by the entrepreneur John Henry Iles under the baton of Sir Arthur Sullivan (himself a director of the Crystal Palace). Many of the Test Pieces set have since become staples of the band repertoire including Arthur Bliss’s Kenilworth Suite, Holst’s Moorside suite and Ireland’s A Downland suite.

Tragically, in November 1936, the Palace suffered a devasting fire. So great was the damage that the Palace was never rebuilt and London lost forever one of its iconic landmarks. Happily, its legacy lives on as we shall see in later posts on this theme accompanying the current Music Department exhibition.

5 Responses to Light Fantastic: music and the Crystal Palace