“For the last three years I have been tormented by the idea of a vast opera for which I would write both the words and the music… I am resisting the temptation of carrying out this project, and I hope I will resist to the end” (Berlioz. Mémoires, 1854)

“Alas, no, I have not been able to resist. I have just completed the poem and the music of Les Troyens, an opera in five acts. What is going to happen to this vast work?” (Ibid. Footnote added in 1858)

Thank goodness he did not resist the temptation otherwise we should have been denied one of the greatest operatic masterpieces and surely Berlioz’s crowning glory.

The musical world is eagerly awaiting the first performances of Les Troyens, Berlioz’s great epic based on Books I, II and IV of Virgil’s Aeneid, at the Royal Opera House for 40 years (25th June – 11th July). It has not been given there in its entirety since Colin Davis’s performances in September 1969 (in French) and September 1972 (in Edward Dent’s English translation). There is also a concert performance by the ROH at the Proms on Sunday July 22nd.

Berlioz never saw Les Troyens performed complete: only the last three acts, divided into five, renamed Les Troyens à Carthage, with several cuts, were first performed on 4th November 1863 at the Théâtre Lyrique in Paris. However, the purpose of this post is not to discuss the work itself (there are others who do that far more eloquently than I could possibly hope to), but to provide an overview of the resources here at the UL and in the Pendlebury which are available should you wish to immerse yourself in this unique work. Me? I love it: unreservedly, wholeheartedly, the music is sublime, original, astonishing.

There are CDs of Colin Davis’s benchmark 1969 recording in the Pendlebury (although his 2000 LSO Live recording is equally sumptuous…a suggestion for new stock perhaps?): CD.C.177.

DVDs are available in the Pendlebury from John Eliot Gardener DVD.C.23, James Levine at the Met DVD.C.14 and the 2000 Salzburg Festival with Cambreling DVD.C.10. 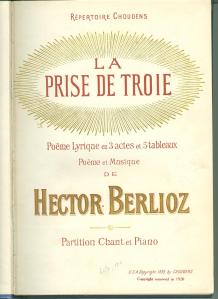 The New Berlioz Edition is available in both the UL and the Pendlebury which includes Hugh MacDonald’s full score of Les Troyens (the first ever published). Pa.200.80B.B2A-C at the Pendlebury and M200.a.64.2a-c at the UL.

Then it gets a little more complex.

The various manifestations of the Choudens vocal scores of La Prise de Troie and Les Troyens à Carthage reflect the sad history of “productions” of Berlioz’s original conception, sacrificed on the altar of pragmatism. Invaluable background on these scores by Hugh MacDonald is presented in Appendix C (p.212 ff) of the Cambridge Opera Handbook on Les Troyens already mentioned above.

Of considerable historical interest is a copy of the first 1863 Choudens edition of Les Troyens à Carthage held at the Pendlebury at XRb.261.80B.T1. It contains many of the cuts listed by MacDonald reflecting performances of the time, much to Berlioz’s distress. 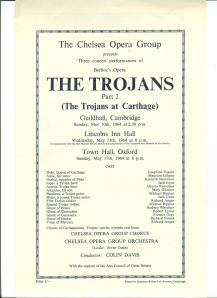 Programme for 1964 performance by the Chelsea Opera Group

We can offer a little 20th century performance history context: as a legal deposit library, the UL receives programmes from the Royal Opera House and so has those for the 1969 and 1972 performances. We also have, in our concert programme archives in the Music Department, programmes as follows:

If you would like to look at any of these, just ask in the Anderson Room at the UL.

I began this post with a quote from M. Berlioz himself, I can think of no better way to close than with one from Sir Colin Davis, who has done so much to reawaken our understanding and appreciation of Berlioz through performances he has conducted:

“There is no other music like it. I don’t know a moment when Berlioz is ever plodding or pedestrian. He always comes up with some startling new idea which still surprises me, still gives me immense pleasure.” (Sir Colin Davis interview with David Cairns in 2000)