As has been hinted at in a previous post, we are and will be looking at music collectors whose collection items were not included in the UL’s Shelf Lives : Four Centuries of Collectors and their Books exhibition. After Anna’s piece on Franck Thomas Arnold, it’s time to shed some light on the Pendlebury Library’s side of things.

The Lent term display case paid tribute to our library’s name patron Richard Pendlebury (1847-1902), whose collections laid the foundations for the current library. Richard Pendlebury was a full-fledged Cambridge man, who started his studies in mathematics at St. John’s College in 1866. Four years later he graduated as senior wrangler (or Head of the First Class in Mathematics) and as a recipient of the Smith’s Prize, and was subsequently appointed to a fellowship at his college, where he remained until his death in 1902. Further to this he held a University lectureship in Mathematics, which led to a professorship later in his life. Besides mathematics, Richard Pendlebury’s interests were focused on climbing (particularly in the Alps), music in general and collecting musical works in particular. He was very involved in Cambridge musical life as an avid performer, which is clearly reflected in his music collections. 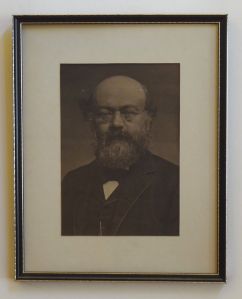 It was his significant collection of about 2,000 volumes of printed and manuscript music which formed the initial stock of the current Faculty of Music library when it was founded in 1929. These had originally been given to the Fitzwilliam Museum between 1880 and 1902, but were moved to the University Library in 1925. As calls to make the collection borrowable became louder, a new location with easier access was sought – and soon found at the Faculty of Music. Thanks to Charles Cudworth, the first librarian of the Music Faculty, a fully functioning faculty library bearing Pendlebury’s name was established around it, which has been expanding ever since.

While all music manuscripts, including most of those from the original Pendlebury bequest, were eventually transferred to the University Library in 1994, you can still spot some original Pendlebury printed scores on the open shelves of the library. They tend to be orchestral and chamber music of the great masters of the 18th and 19th century. Most of these books bear a gilt monogram stamped on their covers, representing Pendlebury’s initials.

Another part of Pendlebury’s bibliophile legacy, mostly rather valuable early printed mathematical books can now be found at St John’s College library’s special collections (for more details see their Pendlebury collection page). Among these incunabula are, for example, several early printed editions of Euclid, including the first from 1482, which contains the oldest printed mathematical diagrams.

Further information on Richard Pendlebury and his importance as a Cambridge collector can be found in a CULIB article from 2006 by Anna Pensaert.

The "author" MusiCB3 is used for all the "guest contributions". Every post by a guest is signed. Most of our guests are based in Cambridge (libraries). If you would like to contribute to this blog as a guest please contact us via music [at-sign-thingy] lib [dot] cam [dot] ac [dot] uk.
View all posts by musicb3 →
This entry was posted in Uncategorized and tagged Collectors and collecting, Music collectors, Pendlebury Library of Music, Richard Pendlebury, Shelf lives. Bookmark the permalink.